Season: Spring.
Weather: Chilly.
Location: Brussels – chocolatey, Antwerp – funky, Amsterdam – eye opening
Company: Locals – regimented, foreigners fun.
Affordability: Can’t say, everything was paid for.
Highlight: Tormenting our Belgian handlers on a daily basis.
Lowlight: Brussels, apart from the center square, I just don’t see the point of it. It’s like an experiment to see if you can bore someone to death.
I originally wrote this many years ago, but thought it was worth a mildly edited repost here.
This is all about my first trip to Europe, in May 2000. I’d been out of the country before, but never to a place that required a flight. Being a poor student at the time there was no way I could have managed this trip on my own budget, so fortunately for myself and a young miss Winnie Zwane, we were sponsored by the Belgium group of Katholieke Studenten Jeugd, a Belgian youth movement, supposedly related to the catholic church, but in reality not at all. Winnie and myself were on the NEC (National executive committee) of the Association of Catholic Tertiary Students (ACTS) and were therefore a fairly logical link for the KSJ guys in South Africa. So KSJ would pay for us to go join them on a youth conference called WorldShake. Then in a few months they would all fly out to come explore South Africa.


After a very kind send off from my friends Marc, Louis and Tabatha, I found myself sitting in a seat aboard the now thankfully extinct Sabena airways for my flight to Brussels, trying to get some sleep when we hit some turbulence. It wasn't particularly rough, but I did get a little concerned when the overhead bins start cracking and coming down. Apparently this isn’t a big deal to the crew as they had contingencies in place for this. Duct tape comes out and overhead bins get stuck in place!

At the airport we were met by a cool guy by the name of Lieven Smeyers and our host who’s name I can’t for the life of me remember. Forgetfulness will be a feature of this blog post, as it was some time ago and my memory for names is about as good as my memory for high school biology, miserable. For now we’ll call our lady host Lena. So off we go in a tiny VW to Lena’s place for the night before heading to our accommodation for week one which happened to be a former monastery in the city.

The monastery was a fantastic building. Very old, but with a real solid feeling to it. We met the rest of the participants, two from the states, Anna and Dirk (assume names are just made up unless otherwise specified), a whole bunch of Flemish youth, the Cubans, lots of other Spanish people, West Africans, a few from Asia and then the Latvians. 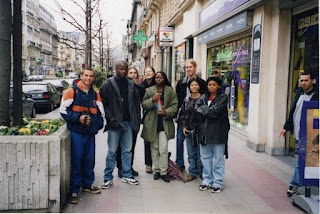 I hadn’t realised yet, but Belgium might just be the country with the least attractive people around. Well at least in Flanders where I spent my time. Being recently singled from my varsity girlfriend Candice (not the Candice I'm now married to), I went on the prowl. Looking all over the city for an attractive young girl who would find my African charm irresistible… But sadly for me, and even more sadly for the people of Flanders, I never found any.

But back to the Latvians Agnesse and Innesse, and for once those are real names, they obviously make an impact! Never having heard of Latvia before I first had to find out where it was. Right next to Estonia was the quick answer, not that helped me much! But the point was, Eastern Europe had sent us two of the most beautiful girls I’d seen up to that point. Both with long blond hair, big blue eyes an an accent that would shake your fillings loose! Kind of like Russian, underwater, with a megaphone.

So Latvia is a cold place with beautiful women. Then their parties consist of sitting mostly naked in a sauna, drinking, then running into the snow possibly rolling around a little and then heading back to the sauna. Is anyone else googling flights to Latvia right now? Winnie and I really hit it off with the two Latvians. I think it’s because we were mutually bored to death by the dull Flemish and the far too religious Spanish! We’d hang out a lot, take advantage of the trust system for drinks (put your money in a basket and take what you want, somehow it may not work well in Africa!) and generally got up to mischief and got shouted at for oversleeping when we should be in our debating sessions!

Week one passed pretty quickly with good company then it was on to our off week, which for Winnie and myself meant heading to Lieven’s flat in Antwerp. I actually found a sent email in my old yahoo mailbox, so I thought it would be apt to re-post it here.


I’m staying in Antwerp for a while and I must say that it is a lot better than Brussels. This place actually has people in it, and some of them are below the age of 30!!! We went to a pub tonight for a few drinks which was really nice, the pub was called Via Via, interestingly half of the people there brought their dogs with them. Heading back to Brussels soon which is a pity cos I really like it here. Anyway maybe I can come back again later. We’re going to the SA embassy tomorrow for a visit and the the head office of our host group, hopefully there wont be anymore long meetings.Its freezing here at the moment, I want sunny SA back. The one good thing here is that the sun sets at about 21h15 at the moment, and its still light at 21h30, the only thing is you cant feel the sunshine, and you are lucky if you can see it.

Antwerp led to Amsterdam, and left me in a slight state of shock. Everyone here looked unique, a big change from Belgium. Maybe the description of your typical Belgian would help. Picture a round face, dark hair in a bob, brown eyes and fairly shapeless. That’s pretty much it, male or female. I’m surprised they don’t get confused all the time! Amsterdam was a very cool city, and not just for it’s red light district (Antwerp's was actually better) and weed filled coffee shops. It just has a sense of life to it. We didn’t get to spend too much time there because we had to head back to Belgium, but it was really good fun. After Amsterdam it was off to Brugge. The so called Venice of the south. Actually a really nice city, but having been to Venice since, it was far plainer.

The last week was much better. Our host city was Mechelen, and the foreigners were handed something called a daily subsistence allowance. This was pretty cool, first a free trip, and then some free spending money. I quite liked this idea, and it would become a big feature in my future travels! So we moved into our new base, and amazingly it was part of a castle, including moat and huge rolling lawns. Agnesse and Inesse had made a sign welcoming Winnie and myself. From memory it said “Welcome South Africa, who’s always sleeping, always late and always having fun”! I’d missed those girls. We had a great week, hung out a lot. I had to keep chasing the American girl out of my bed, not really my type, and I still wanted Candice back… We also took a little more interest in the conference, and pretty much showed the rest of the bunch how South Africans won’t get steam rolled into corners. It was like fight club, and Winnie and I were winning! 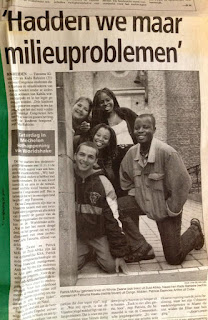 We also put together a play of sorts but I had no clue what was going on so I pretended to be Bruce Lee. In the clipping below are Agnesse, Innesse, Winnie, Andre our Indionesian friend, and then me/Bruce Lee :) 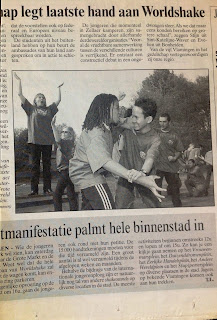 So that was the trip. We left feeling a little sad. Innesse was in tears when she said goodbye, I think she might have had a little crush on yours truly. The American girl was upset she couldn’t get me into bed, and Winnie and I were just happy to be going home. Keeping with our tradition though, I somehow ended up at my gate much too late. Luggage was being unloaded and I was apparently bumped. Fortunately some old lady with a walker came to my rescue. She’d asked for a wheelchair and nobody brought her one so she had to walk. They put her on the plane, and I followed suit to a welcoming South Africa. Getting back to campus the next week was interesting, everywhere I looked I just saw beautiful women. I was so starved of hotness (besides the Latvians) that in my third week when I thought I saw a good looking Belgian I took some pictures. Showing these to my classmates I was informed that it was merely my standards that had dropped!
Posted by Traveller at Wednesday, May 31, 2000